You are here: Home › Humour › A picture… and then a thousand words.

A friend sent me this picture a few weeks ago, with the accompanying caption. One of those fwd: emails which make their way around offices across the country. 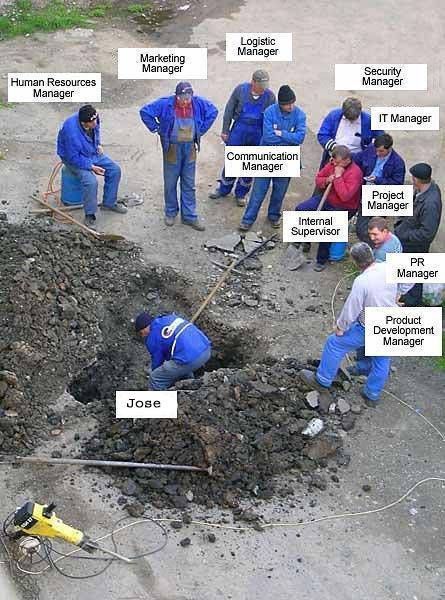 This financial crisis is forcing State and local agencies to make some tough decisions. If things continue for much longer, there’s a real risk that we may have to lay off Jose.

My friend’s note added her own editorializing, how she objected to the use of the name ‘Jose’, and that she would rather call him ‘Bob’. I saw this as a knee-jerk reaction in keeping with the climate of the times, so I offered the following response:

What you don’t realize is that Jose is actually the college-educated great-grandson of Jose Martin de Jesus Maria y Pedazos de La Barca Grande, first Ambassador of Spain to the United States after the civil war. After settling in the US, the de Jesus Maria y Pedazos de La Barca Grande were actually very distinguished members of their community, and Jose Martin’s sons all became lawyers and doctors as well as philanthropists. Jose Martin’s youngest son, Francisco Maria de Jesus Maria y Pedazos de La Barca Grande, was instrumental in the development of security technology during the cold war (and the game Pong). Unfortunately, Jose Martin’s granddaughter, while an accomplished forensic pathologist in her own right, was caught in a scandal with the Prince of Liechtenstein in the 60’s. She became pregnant, and while the patriarch of the clan wanted to disown her and the child, the rest of the family urged him to reconsider.

So it was that Jose Francisco de Jesus (they dropped the Maria y Pedazos de La Barca Grande sometime during the 1970’s except on official paperwork) received the best education in Ivy League schools. Fortunately, the Prince of Liechtenstein was unable to claim the child, or his last name would’ve been Volkswagenkrugermeisterzeug.

Jose Francisco had dreams of becoming a statesman like many of his ancestors. Unfortunately the family fortunes vanished during the real estate crash, plunging the good name of de Jesus Maria y Pedazos de La Barca Grande into shame. Now, Jose Francisco has had to resort to menial labour, particularly since everybody assumes he’s a bloody Mexican.

So you see, by calling him ‘Bob’, you further erase the long and illustrious history of Jose and his ancestors.